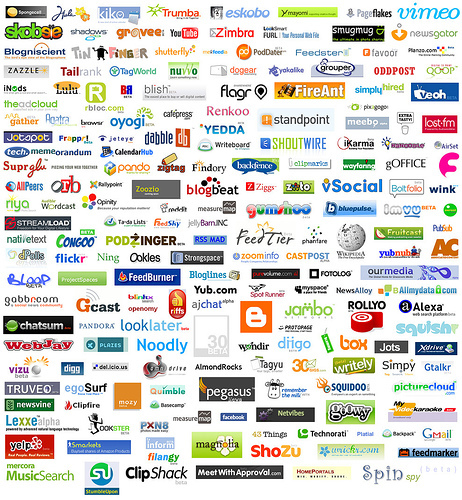 The following is an abstract from an item I produced for the IDeA in response to a media query about the impact of Web 2.0 on Local Government.

The term ‘Web 2.0′ was officially coined in 2004 by Dale Dougherty, a vice-president of O’Reilly Media Inc. The term was intended to capture the feeling that despite the dot-com boom and subsequent bust, the Web was ‘more important than ever, with exciting new applications and sites popping up with surprising regularity’ It was recognised that companies that had survived the dot-com firestorms of the late 90s now appeared to be stronger and have a number of things in common. Thus the term was not coined in an attempt to capture the essence of an identified group of technologies, but an attempt to capture something far more amorphous.Is it a revolution in the way we use the Web? Is it another technology ‘bubble’? It rather depends on who you ask. The short answer, for many people, is to make a reference to a group of technologies which have become deeply associated with the term: blogs, wikis, podcasts, RSS feeds etc., which facilitate a more socially connected Web where everyone is able to add to and edit the information space.For the inventor of the Web, Sir Tim Berners-Lee, there is a tremendous sense of déjà vu about all this. When asked in an interview for a podcast, published on IBM’s website, whether Web 2.0 was different to what might be called Web 1.0 because the former is all about connecting people, he replied:“Totally not. Web 1.0 was all about connecting people. It was an interactive space, and I think Web 2.0 is of course a piece of jargon, nobody even knows what it means. If Web 2.0 for you is blogs and wikis, then that is people to people. But that was what the Web was supposed to be all along. And in fact, you know, this ‘Web 2.0’, it means using the standards which have been produced by all these people working on Web 1.0.”So, in essence, we can probably summarise as follows:

The impact on local government

It’s a bit of a mixed bag in terms of how Web 2.0 is being used, deployed or adopted across local authorities, with some clearly seeing the benefits, and others reticent to get involved. Sites such as MySociety are pointing the way, with services such as ‘FixMy Street‘ demonstrating how the technology can be used to engage directly with citizens. The entrepreneurial spirit is also evident, with freelance individuals developing sites such as Local Gov Glossary, LGSearch and lgShout, but the question remains as to why these sorts of services are not developed, sponsored or supported by local authorities.On a positive note, there is growing evidence that more councils are becoming actively engaged in developing online community techniques within councils’ own web services, with Redbridge a notable example. Their use of on-line polls for getting feedback on Post Office closures, and use of interactive forums is pretty much ground breaking stuff for local government. The whole site has that 21st century look about it, – wish there were more like it! Also worth a mention is Chesterblogs, a blogging portal for city councillors. My apologies to any other candidate councils and services not mentioned here, but I haven’t had the time to trawl through over 410 council web sites and several thousand local services to come up with a definitive list (my next project maybe!)However, broadly speaking, there remains an undercurrent of distrust, particularly where established command and control functions are threatened. The main concern is that employees may be wasting time in the use of non-work related social networks or websites, and in the related security and organisational image concerns. Managers want to know what their employees are doing, and quite often the only way of bringing about greater control in the workplace is by getting ICT departments to block access to sites such as Facebook and Youtube.(Interesting aside – Hazel Blears’s keynote presentation to the recent International eParticipation Symposium expounded the virtues of using Youtube to get information out to citizens, and explained how DCLG were using this as a key media channel. She is clearly not aware that most government departments block employee access to Youtube for the reasons described above!.)Encouragingly, there do appear to be some enlightened managers working in local government, and to quote David Wilde, chief information officer at the London Borough of Waltham Forest, “For managers it can be difficult to know what exactly their employees are doing. But the organisation needs to be outcome-based, and I don’t think we should be using technology to prevent access to [social networking] sites. If there are staff performance issues we should address them directly”.So, in summary, the use of Web 2.0 sites and techniques in local authorities breaks down into several categories:

The IDeA recognised the potential benefits of Web 2.0 technologies and techniques as early as 2005, and in this sense can be considered early adopters. The Knowledge Team identified Web 2.0 as the foundation for enabling people and organisations in the sector to improve the way they work through capturing and sharing know-how. A strategy was developed to improve the way that councils connect with each other to ensure that key learning and experience is shared within and across the sector. A key part of the strategy was the support, development and maintenance of ‘communities of practice’. These communities would connect individuals working in local authorities and provide a collaborative framework in which they can find solutions in areas where there is a common and shared interest.This led to the development of the community of practice platform, which was launched as a pilot in early 2006, and as a fully supported service in September 2006. This has proved to be enormously successful, with over 9000 registered users representing nearly all local councils in England and Wales. There are presently 290 communities on the platform, devoted to sharing knowledge and best practice around a central theme of local government service improvement.The platform supports a range of Web 2.0 applications that enable users to find and connect with experts, collaborate on documents, debate in forums and publicise their achievements, all in one integrated and trusted environment. The facilities are free to use for employees in local government and for people and third party organisations working with councils on service efficiency or improvement initiatives. It is currently the most successful community environment for professionals in the public sector.[Steve Dale has been retained by the IDeA to support and advise on the strategic development of their Communities of Practice Platform and other Web 2.0 services.]