Apparently there is a world-wide epidemic of ‘Zombie Smartphone Users’, which I can quite believe based on my infrequent sojourns into London. A smartphone zombie is a pedestrian who walks slowly and without attention to their surroundings because they are focussed on their smartphone.

I used to keep dodging out of the way of people with their heads in their ‘phones as they walked towards me, but I found that maximising my concentration levels in order to avoid collisions was quite tiring. Instead, if I now see a Smartphone Zombie coming my way, I will stand still and wait for the inevitable collision to occur. It takes less ‘dodging’ effort on my part, and can be quite amusing to see the look of alarm on the zombie’s face when they’ve made physical contact.

The issue of people using their smartphones has become such problem that a variety of initiatives have been implemented around the world in an attempt to curb injuries and accidents related to their use. The problem has reached such serious levels in places like Japan that they have even invented their own term for it, that of ‘Aruki Sumaho’, or ‘smartphone walking’. Cities such as Chongqing and Antwerp have introduced special lanes for smartphone users to help direct and manage them.

I’m a great believer in the Darwin principle of survival of the fittest. If people choose to ignore potentially fatal hazards whilst texting, then they get what they deserve, and maybe over several hundred years they will all be gone. That will leave a safer environment for the rest of us, pavement or road users! Get rid of the signs! 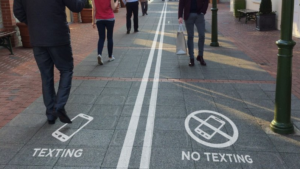 Performance Appraisals and References – some ideas on what to write