I’ve been a bit tardy in posting any details about our last cruise, which was over 8 months ago. One of those tasks I’ve been meaning to do but never quite getting high enough up the priority list to actually invoke some action! Anyway, at long last.

Oceania promotes itself as providing the finest cuisine at sea, and I can’t fault that statement. The food throughout our cruise was varied, plentiful and excellent. Lynda (wife) took an immediate liking to lobster, which became a staple part of her diet during out time on board, while I was quite happy to overdose on sushi.

Our port of embarkation. You can take it or leave it, I prefer to leave it (see Lowlights). Big, brash, unfriendly.

The southernmost point in the USA. First settled in the 1880’s, at the very end of the island chain stretching from Miami. Separated from Florida mainland by 42 bridges and closer to Havana, Cuba than it is to Miami. Still has a homely, small town feel. Safe to walk. Quaint brightly coloured houses and shops. Home to artists, writers and treasure hunters.  Made famous by Ernest Hemingway (For Whom The Bell Tolls, etc.) and no visit would be complete without a drink or three at his favourite watering hole, Sloppy Joe’s. I recommend the ‘Sloppy Rita’.

A ‘must visit’ for anyone in the vicinity of the southern Caribbean. Cartagena’s colonial walled city and fortress has been a UNESCO World Heritage Site since 1984. You could easily spend a whole day exploring the old walled city with its colonial architecture, historiucal homes, churches, palaces and courtyards. The Old Town has several museums, restaurants, shops and cafes. The Church of Saint Peter Claver,  the Cathedral of Cartagena and for those with a morbid disposition, the Palace of the Inquisition where many torture devices are on display are all worth a visit. A taxi ride away is The Castle of San Felipe de Barajas  which is simply amazing. By all accounts the greatest fortress ever built by the Spaniards in their colonies. We spent a couple of hours there snd still didn’t see everything. Cartagena is also renowned for its jade, and you’ll get a good price for quality jade at any of the shops or jade factories.

This was the main purpose of this particular cruise, I’ve always wanted to see the Panama Canal, and I wasn’t disappointed. It took us about 9.5 hours to complete the traverse, from the Gatun Locks on the Caribbean Sea side to departing the Locks on the Pacific Ocean side. We could see the new, wider locks that have been under construction for several years, which were due to open on the 26th June 2016. I assume they are now working. Photos of the journey through the canal are included at the end of this post. This diagram gives an overview of the lock system (source: Wikipedia). 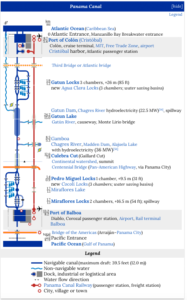 Cruise ships pay a rate based on the number of berths, which is around $138 per occupied berth, i.e. number of passengers that can be accommodated in permanent beds. For our ship that would be about 834 berths or a total of almost $114,000. I heard (anecdotal evidence) that the most expensive traverse was one of the giant cruise liners (e.g. Oasis of the Seas) with over 6000 berths , which would have cost around $850,000.  Given the number of ships going each way on a daily basis, this is clearly a signifiant contribution to Panama’s GDP. Hence why Nicaragua wants to grab some of this commerce when in June 2013 they awarded the Hong Kong-based HKND Group a 50-year concession to develop a canal through the country. It will be interesting to see what effect this has on the Panama Canal pricing model when the route through Nicaragua opens, since there will no doubt be competition for business.

Puntarenas is the the capital and largest city in the Province of Puntarenas, on the Pacific coast of Costa Rica. Costa Rica has remained among the most stable, prosperous, and progressive nations in Latin America. Following a brief civil war, it permanently  abolished its army in 1949, becoming one of only a few sovereign nations without a standing army. Around 25% of the land area is in protected national parks and protected areas, the largest percentage of protected areas in the world. It is renowned for its variety of wildlife.

Our visit took in the San Luis Park, a scenic drive inland of just under 2 hours, with the land getting ever more verdant as we approached the mountains. When we arrived at the park we walked a short trail until we arrived at the hummingbird garden. This was an amazing photo opportunity, since literally dozens of different species were coming to feed from the plastic bottles hung from the trees. Further along the rail we were told to look out for the strikingly coloured quetzel. Easily spotted, you might think,  given its striking colours, but we never saw one. I don’t doubt they are there somewhere though!
Our day was mostly taken up with our nature trail walk, so no time for shopping, which was fine with me!

Once a fishing village, the town is now a small tourist centre, with the emphasis on ‘small’. There was a tender operation to get us from ship to shore since there was no docking facility, even for a small ships like ours.  We were welcomed by local singers and dancers on the quayside, all in their colourful local costumes. There are not many restaurants, outdoor cafes or stores, which give it a quaint feel. The food is excellent, especially the fresh seafood. We had a relaxing afternoon with a wonderful view of the lagoon, and being serenaded by the wandering minstrels (that’s probably not the real name – two or three locals with Spanish guitars). Overall, a very charming port of call, full of local colour and good food.

There’s not much of interest in the immediate vicinity of the Port, other then a few vendor stalls. We decided on a guided tour out to La Antigua, Gautemala’s colonial capital , about 90mins by bus from Porto Quetzal. La Antigua is a UNESCO World Heritage site, famous for its Spanish-influenced Baroque architecture and its many ruins of colonial churches.  The busy central marketplaceis known to locals as the Mercado, and was a great place to sit and observe the local colour and purchase handicrafts. The vendors weren’t too pushy and took no for an answer if you weren’t interested. A pleasant day out.

Our original itinerary was to call at Acapulco, but we received news after we left Porto Quetzal that there had been some trouble there; shootings and at least one death, so our captain decided to call at Zihuatanejo instead. This was the first time a cruise liner had called at the port in over 2 years, so we were quite popular with the locals. There were no docking facilities so a tender service were used to transfer passengers to/from the shore. Zihuatanejo spent most of its history as a sleepy fishing village. The area is now the third most visited area in Mexico, after Cancun and Peurto Vallarta. We spent a pleasant afternoon at one of the beach restaurants, eating locally caught fresh seafood, served to us as we reclined one of the sun-loungers on the beach.  Luxury! The locals were all very friendly; we didn’t get bothered by any beach vendors. Altogether a perfect afternoon.

In the 1930’s, the population of Cabo San Lucas was around 400 people. It soon gained a reputation as a sports fishing haven, accessible only by plane, boat or anyone willing to travel 1000 miles of rutted dirts road to get there. After World War II, word started spreading around Southern California’s elite and Los Cabos became a playground for the rich and famous. By 1950, Bill Cosby, Phil Harris, Desi Arnez and The Duke had built the exclusive hotel Las Cruces on the East Cape. More development followed. In 1974 the peninsular highway was built and Los Cabos became accessible to Middle America.  Now with a population of over 70,000, Los Cabos has been rated as one of Mexico’s top 5 tourist destinations, famous for its beaches, scuba diving, the sea arch ‘El Arco de Cabo San Lucas’, and marine life. This was another tender operation for us, but worth the effort to get ashore. Lots of very good restaurants, shopping, a marina, some beuatiful properties and miles of pristine beaches. What is there not to love!

We reach our final destination for this particular voyage. It’s been a great experience – many wonderful places we’ve never visited before, and I can tick the Panama Canal off on my bucket list! Excellent food and excellent crew on the Regatta. Hope to see them again sometime. We’ve been to San Francisco several time before, but it’s always a great experience, and inevitably rounded off by a visit to Pier 39 and the Crab House!

Day one of our holiday when we arrived in Miami was an unwelcome reminder of the pernicious tipping culture prevalent across the USA. Tips are required – or at least expected – for just about any service, even if the service is a basic and fundamental part of the actual job rather than as a value-added extra.  We were also often reminded (maybe because of our British accent) that the normal tipping rate was 18-20%. At dinner on the first evening, our waiter – a young lad of maybe 21, performed the basic tasks of giving us a menu, taking our order, and delivering what we had ordered.

There was no help, explanation or recommendations about the food, just a perfunctory process of writing down the order. At the end of the meal the bill for $55.20 was delivered with a handwritten scrawl suggesting 18% or 20% gratuity. The waiter had conveniently worked this out as $9.94 or $11.04 respectively. I didn’t want to start the holiday on a sour note, so I dutifully gave the waiter $65.55, which was $55.20 + $10 + $0.35 I had in loose change. I was somewhat taken aback to be told by the waiter “we don’t take coins”, which I inferred to mean I should round up my amount to $66.00 in notes.

Instead I took back all of the coins and left him with $65.00. His loss, albeit a small one. I’m not sure what would have happened if I had tendered the exact amount without the “optional” gratuity. Would they have rounded the bill down to $55.00 or (more likely) round it up to $56.00! Anyway, we learnt a lesson – coins are no longer legal tender in some restaurants. This set the scene for the rest of our holiday, where tipping was treated more as an obligation than an option, and had absolutely nothing at all to do with the quality of the service. Hoping that one day the American hospitality sector will cease relying on its customers to subsidise the low pay rates they give their workers and legislate for a decent living wage.

Our itinerary as follows, see also the map below (use your mouse roll-over to expand).