0
Read Time:4 Minute, 7 Second
Two days at sea and we arrived at Mindelo in the Cape Verde islands. The temperature has been gradually rising since we left Lisbon, which I guess is to be expected as we sail southwards towards the equator. The sea temperature is around 17C and the air temperature averages around 24C.
Having been told that whales, dolphins and porpoises are fairly common in the area we are sailing I’ve been keeping a constant eye out for any signs of sea life. One day before arriving at Cape Verdes I was at last rewarded for my vigilance and spotted a some porpoises cavorting just off the starboard aft deck.  They were only there for about 30 seconds, not long enough to grab a camera, so no picture I’m afraid. Lynda (wife) was nowhere around so missed the spectacle – much to her dismay.
So, about Mindelo. It lies some 400 miles off the coast of Senegal and is the main town of São Vincent, one of the 10 islands that make up the Cape Verdes archipelago. Around 50,000 people live in Mindelo, which is about 12% of the entire population of the islands. All of the islands were formed as a result of magma rising up through the Atlantic Ocean. This is why the islands have never been considered as part of the African continent and why they are devoid of most animal species.
Only animals that could swim or fly have become indigenous. There are no snakes, but an abundance of other reptiles, such as geckos, frogs, and lizards. The islands are a popular resting area for  migratory birds heading south for he winter, and include species such as heron, spoonbill, sandpiper, sanderling, swallows, blue-headed wagtail, northern wheatear, European bee-eater, whimbrel, and various types of egret. Birds unique to Cape Verde are the Raza Island lark, Cape Verde lark, the Alexander’s swift and the Cape Verde Warbler.
The volcanic rock gives the islands a wild and rugged appearance. The climate is very dry, which limits the type of crops that can be cultivated, and much food has to be imported. Fish is an important export, along with salt, which is mined from the islands of Sal, Boa Vista and Maio. Tourism is becoming increasingly important and there is a lot of inward investment for developing hotels and time-share apartments.
History
Until colonisation by Portugal in 1462, the islands were uninhabited, the majority of the population and the labour being slaves from the West African coast. The archipelago was important to the Portuguese due to its  strategic position between Africa, the Americas and Europe, and for a long time Cape Verde was one of the most important slaving stations of the region. Even when the Portuguese were forced to limit their slaving  activities as a result of British intervention in the 19th century, the islands continued to flourish as the centre of the slave trade between West Africa and the Spanish Antilles.
The racial mixture is much as it has been since those 15th century days. Polygamy exists due to a combination of African tribal conditions and the acute shortage of men caused be emigration. Due to severe food shortages following years of drought, hundreds of thousands of Cape Verdeans fled the islands, emigrating to mainland Portugal, Africa or America. Over the years the islands have frequently experienced famines, and many people suffer from malnutrition.
17% of the population are considered extremely poor and 33% very poor.
Exploring
Mindelo harbour grew as an important station where ships took on supplies of coal, water and livestock, and for more than a century was the site of a British-run coaling station, with coal imported from Newcastle. The bay of the port is part of a huge sunken crater and has always been the best harbour of all of tyhose across the islands. 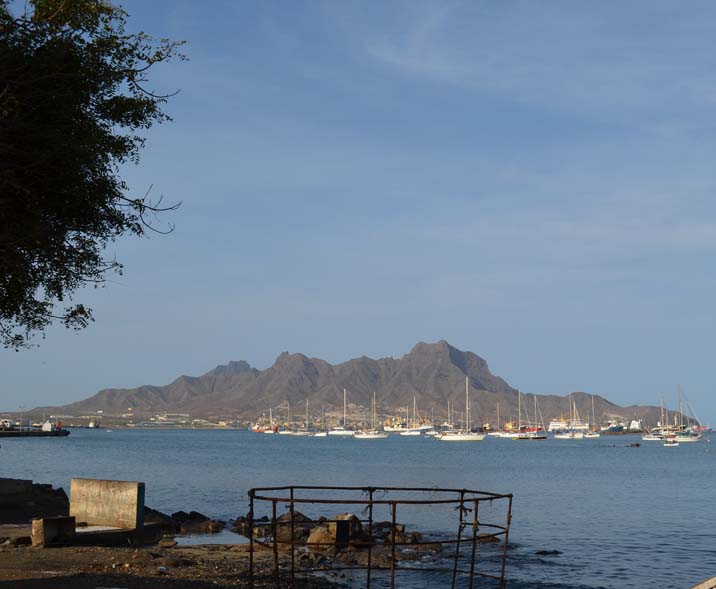 The architecture of the town is preeminently Portuguese, and the main street is fronted by colourful buildings pained in pastel shades. British influence is discernible in the architecture of some of the larger mansion. 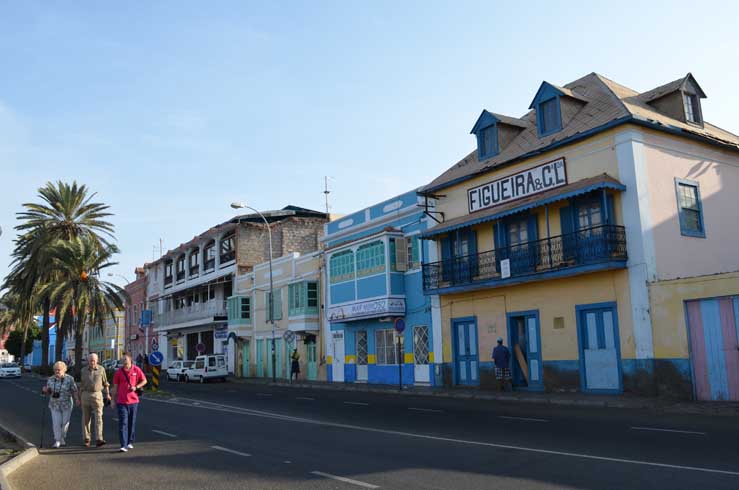 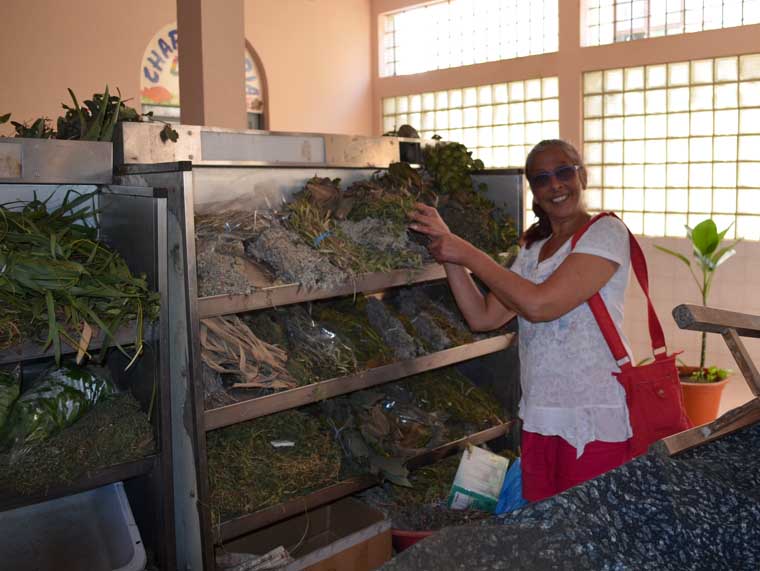 Monte Verde is ascendible by vehicle, and at 2539 ft (750m), you get good views over Mindelo and Baia das Gates (Catfish Bay). 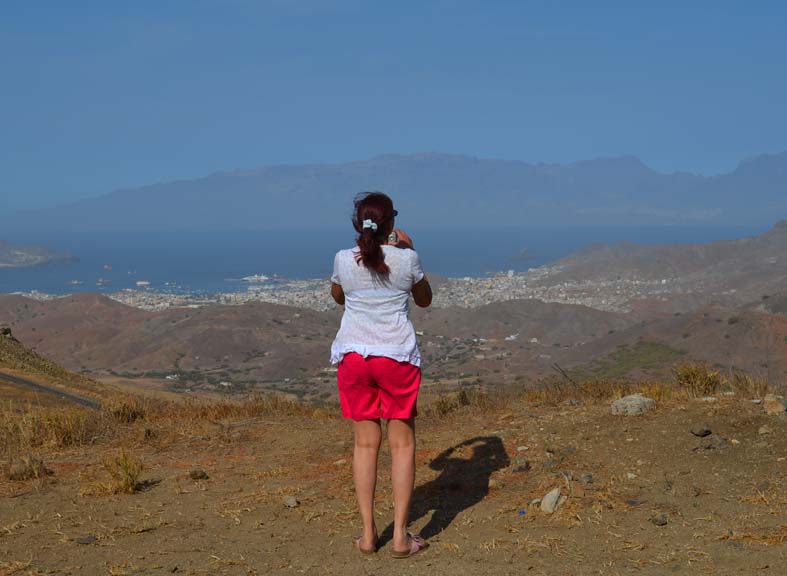 Baia das Gates (Catfish Bay) has clear water and is advertised as one of the best and safest beaches on the island. It is also the venue for the annual carnival, held in June, when over 20,000 people gather. This might explain the large amount of broken glass we saw in the water – so maybe not quite as safe a bathing area as the tourist literature would have you believe! 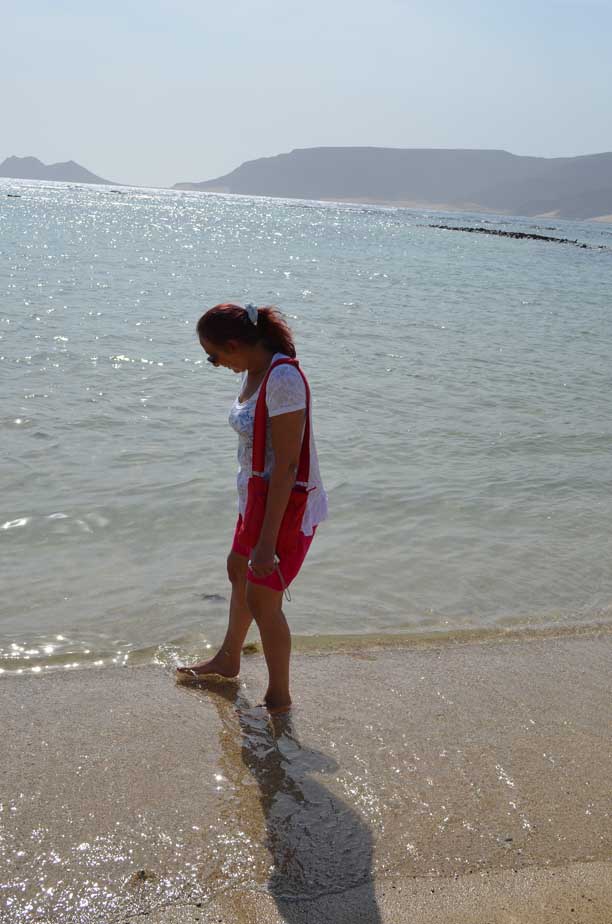 Our next port of call is Macapá on the mouth of the Amazon, which is 5 days sailing across Atlantic. I’m not sure I’ll have much to report on our life on the ocean waves, but will post anything of any significance.