0
Read Time:2 Minute, 47 Second
Continuing my account of our outward journey from Tilbury in England, via Amsterdam, Lisbon, Madeira and Cape Verdes to the Amazon. We arrived in, Funchal, Madeira at 7.30am on Thursday 10th January. The temperature was marginally warmer than Lisbon, our previous port of call, at 20C.
Funchal is the largest city and capital of Portugal’s Autonomous Region of Madeira. Madeira has been called the floating garden of the Atlantic due to its profusion of flowers and fruits that flourish in its Mediterranean climate. "Madeira" means ‘timber’ in Portuguese and the island is so named because when it was discovered in 1419 by two Portuguese navigators, Joao Goncalves Zarco and Tristao Vaz Teixeira, the whole island was wooded, from the peaks to the sea. Funchal means ‘fennel’ which was also aptly named by Zarco and Teixeira because of the abundance of fennel growing on the island.
The discovery of the Madeira archipelago, of which Madeira itself is the largest of the five islands, marked the beginning of the Portuguese navigators of the 15th and 16th centuries. It proved that the Atlantic was not the dangerous abyss populated by terrifying monsters as had previously been believed. Under the governorship of Zarco and Teixeira, the colonists cleared the land for agriculture by setting fire to the dense woodland. Historical accounts say that the island burned for between five and seven years.
In the 16th and 17th Centuries, Spain ruled Portugal (including Madeira) for sixty years and when Charles II of England married Catherine de Braganca in 1662, one of the provisions of the marriage agreement was special favours for English settlers in Madeira. During the era of Napoleon, British troops moved into Madeira to protect it from invasion. In Victorian times, Madeira was a favourite of the wealthy English, the climate being supposedly beneficial to the health, and a pleasant escape from the winter.
Today, Funchal is a modern city, renowned for its high quality cuisine and its most famous ‘export’, Christiano Ronaldo.
A popular tourist attraction is the mountain levadas. When the slaves were imported into Madeira in the 15th and 16th centuries, they were set to work developing the unique and enormous network of irrigation of ditches all over the island, built to bring water from the highest points to the lowest. Modern technology has changed the face of irrigation so these ditches are no longer used for their original purpose, but have been preserved as hiking trails.
Madeira is famous for its embroidery, it’s sweet fortified wine, and its cake!
We didn’t have long to explore the city because the ship was only in the harbour for 5 hours, but we took in the cathedral and Funchai market at Mercado dos Lavarades with its traditionally dressed flower vendors plying their trade next to the fruit and vegetable vendors, where we ended purchasing every variety of passion fruit there could possibly be – orange, banana, vanilla and many more – and I thought there was only one type of passion fruit! The fish market was also very interesting – note the size of the tuna fish segment in the photo and imagine the size of the tuna fish this came from!
Next stop, Cape Verdes islands off the west coast of Africa. 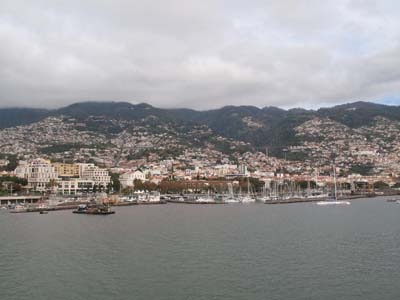 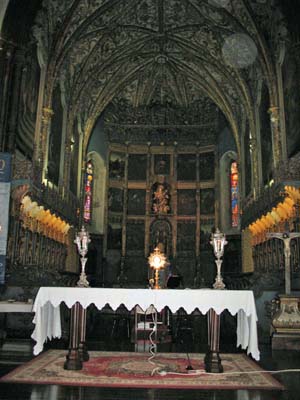 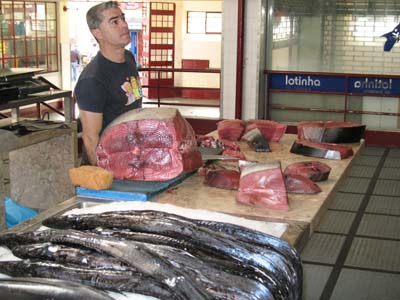