Stephen DaleFebruary 5, 2013October 10, 2020
We arrived at Kingstown, St Vincent early in the morning of Thursday, 31st January after an overnight cruise from St George’s, Granada. The island is the largest of the Grenadines, technically part of the Winward Islands, which are themselves part of the Lesser Antilles.
The island was originally named Hairouna (“The Land of the Blessed”) by the native Caribs. The Caribs aggressively prevented European settlement on St Vincent until 1719. Prior to this, formerly enslaved Africans, who had either been shipwrecked or who had escaped from Barbados, Saint Lucia and Grenada and sought refuge in mainland Saint Vincent, intermarried with the Caribs and became known as Garifuna or Black Caribs. Following the Seven Years War, marked in 1763 by the Treaty of Paris, Britain was granted control of St Vincent. St Vincent gained independence in 1979.
The northern third of the island consists of an enormous and active volcano, La Soufrière, which erupted in 1902 killing 2,000 people. Much farmland was damaged, and the economy deteriorated. In April 1979, La Soufrière erupted again. Although no one was killed, thousands were evacuated, and again there was extensive agricultural damage. The main export is bananas and the main industry is tourism.
Kingstown is the capital and is a bustling hub of activity, with many craft shops, and vibrant fruit & veg and fish markets. Located on the northern outskirts are the Botanical Gardens, founded in 1763 and the oldest of their kind in the Western Hemisphere. We walked the one mile or so to the gardens, but there are plenty of taxis around all offering lifts to the gardens. Apart from the many varieties of trees, flowers and shrubs, the gardens have a sanctuary for the rare St Vincent Parrot (Amazona Guildingi), which is the island’s national bird. We had some fun answering the parrots’ calls of “hello” and “good morning”. I couldn’t coax any other words from them, but I’m sure they knew more. We also spotted – albeit very briefly – a mongoose as it scurried across our path. These were introduced to the island to control the snakes, but are now considered pests because of the damage they do to the agriculture.
From the gardens we took a taxi ride to Fort Charlotte, six hundred feet up on the hill outside Kingstown. This was a 19th century British battlement that once housed 600 troops and a battery of 30 cannons, mostly pointed inland for defence against the Caribs. The Fort is named after King George III’s wife, Queen Charlotte. A section of the Fort is off-limits as it is still used today as a women’s prison, housing between 6 and 12 residents at any one time. The death penalty is still retained on St Vincent and the gallows are located close to the Fort.
The other noteworthy site for tourists is the St George’s Anglcan Cathedral on Grenville Street, with its exquisite stained glass. The Cathedral is famous for its Red Angel window, commissioned by Queen Victoria in memory of her first grandson, the Duke of Clarence. However, she rejected the window because the angel was dressed in red, not white as she had requested, and so years later the window was brought to St Vincent and displayed in this Cathedral.
Once again, we only had the one day to do our exploring of St Vincent. Our ship sailed the same evening for our next destination, St Lucia.
View of Kingstown, St Vincent from Fort Charlotte. 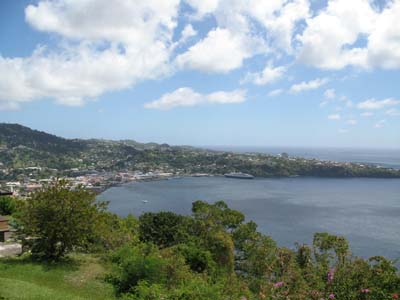 Me at the Botanical Gardens 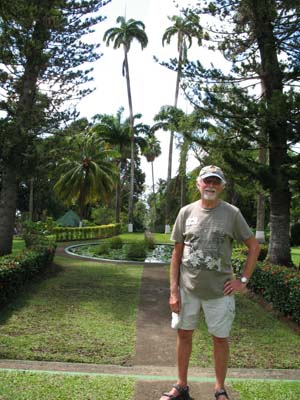 Lynda at the Botanical Gardens 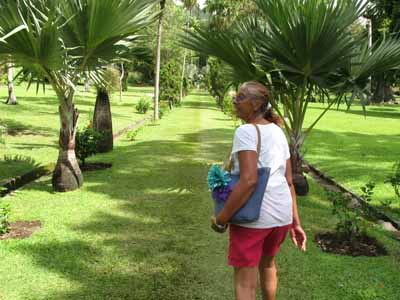