0
Read Time:4 Minute, 47 Second
We set sail (if I can  use that term for a diesel-powered ship) from Amsterdam on the evening of 7th January, headed for our next destination – Lisbon. This entailed navigating back up the 19-mile canal to reach the North Sea, turning left along the English Channel then around the corner of France before heading across the Bay of Biscay. Renowned for its storms and choppy waters, we had fair weather and a relatively calm sea across the Bay. However, the rhythmic and deep swell was too much for some and there were reports of a number of passenger and some crew being laid up with sea-sickness.
We had been advised to keep an eye out for dolphins and maybe the odd fin whale, but I saw nothing of either. Apparently the Bay of Biscay is part of their migratory route during the winter months. Oh well, there’s a way to go yet so will keep looking.
We arrived in Lisbon early on the 8th January, sailing up the Tagus river and catching a glimpse of the illuminated forts and the statue of Christ the King (Cristo-Rei) on the southern bank in Almada. With open arms, it is a copy of the Corcovado (Christ the Redeemer) statue in Rio de Janeiro. It stands 90 feet tall and has a church at its base. We passed beneath the 25 de Abril bridge, at one time the longest suspension bridge in Europe at almost 1.5 miles, before docking on the north side of the Tagus river.

A Bit of Background
Lisbon is one of the oldest cities in the world, and the oldest city in Western Europe, predating other modern European capitals such as London, Paris and Rome by hundreds of years. Julius Caesar made it a municipium called Felicitas Julia, adding to the name Olissipo. Ruled by a series of Germanic tribes from the fifth century, it was captured by the Moors in the eighth century. In 1147, the Crusaders under Afonso Henriques reconquered the city and since then it has been a major political, economic, and cultural centre of Portugal.
Prior to the 18th century, Lisbon had experienced several significant earthquakes – eight in the 14th century, five in the 16th century and three in the 17th century. On 1 November 1755, the city was destroyed by another devastating earthquake, which killed an estimated 30,000 to 40,000 Lisbon residents[ of a population estimated at between 200,000 and 275,000 and destroyed 85 percent of the city’s structures.
Lisbon was the site of three revolutions in the 20th-century. The first, the 5 October 1910 revolution, brought an end to the Portuguese monarchy and established the highly unstable and corrupt Portuguese First Republic. The 6 June 1926 revolution would see the end of that first republic and firmly establish the Estado Novo, or the Portuguese Second Republic, as the ruling regime. The final revolution, the Carnation Revolution, would take place on 25 April 1974 and would end the right-wing Estado Novo and reform the country as the current Portuguese Third Republic.

Lisbon has two sites listed by UNESCO as a World Heritage Site: Belém Tower (pictured below) and Jerónimos Monastery. Belém is famous as the place from which many of the great Portuguese explorers set off on their voyages of discovery. It was built between 1515 and 15 21 as a lighthouse and fortress protecting entry to the city. The tower marks the place from which Vasco da Gama departed for India in 1497. 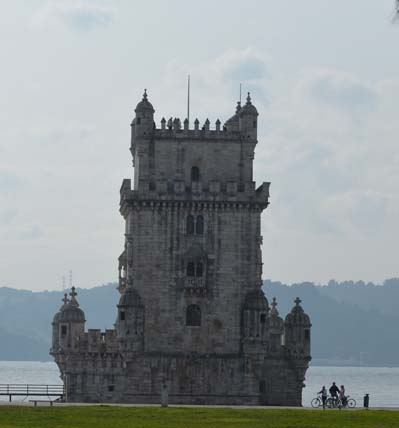 Sightseeing
A traditional form of public transport in Lisbon is the tram. Introduced in the 19th century, the trams were originally imported from the USA. These small but distinctive yellow trams are well suited to the steep hills and narrow streets of the central city. Getting around was relatively cheap and convenient using the tourist 24-hour hop-on-hop-off tickets that can also be used on the buses. 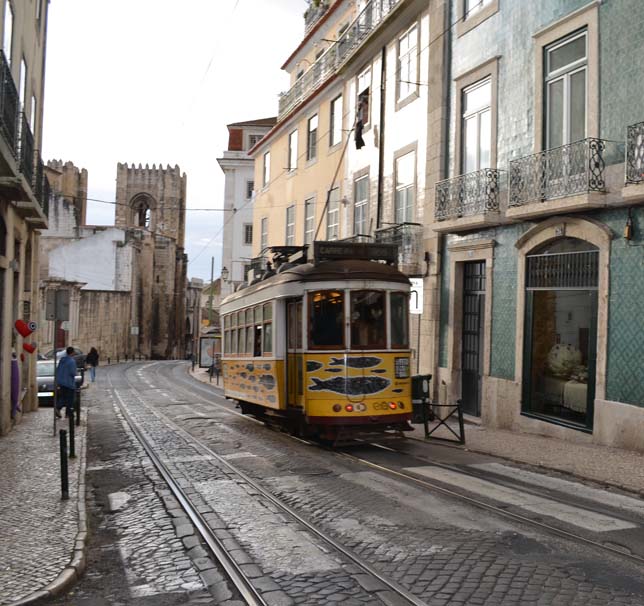 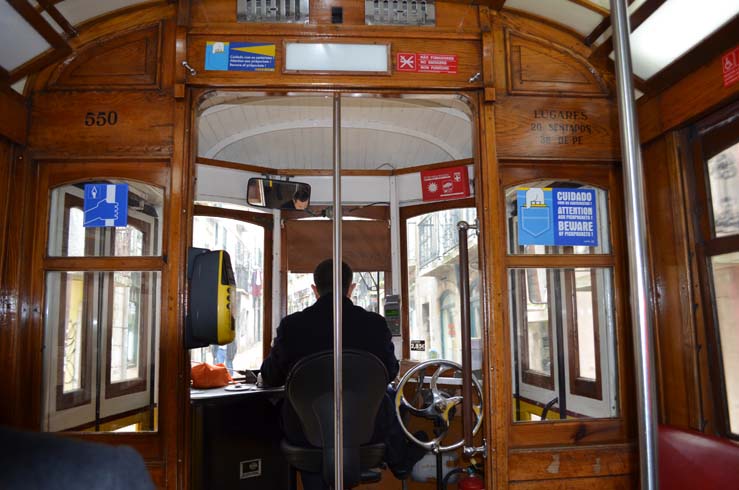 Lisbon’s – and possibly Portugal’s most important historical monument is the Mosteiro dos Jerónimos (Jerónimos Monastery), an opulent church and cloistered garden built in the elegant Manuellian style at the beginning of the 16th century when Portugal was a great sea-going power. 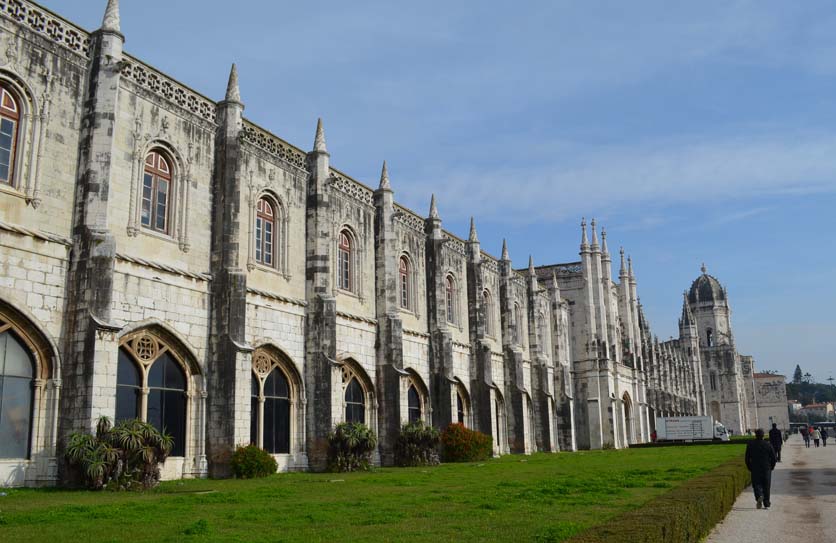 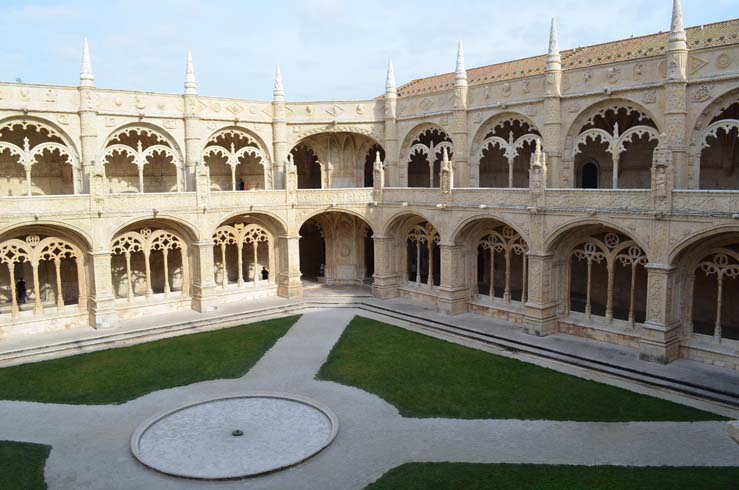 One of the oldest structures in Lisbon is the Castle of São Jorge (St George), built by the Romans and taken by the Moors in 1147 by the first king of Portugal, Alfonso Enriques. It has some beautiful gardens and offers panoramic views of the entire city. 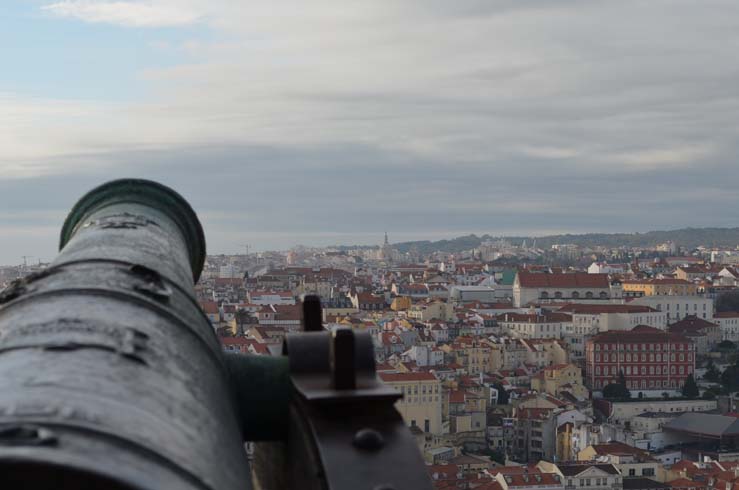 The Santa Justa Elevator is a giant lift, designed and build by Eiffel (as in the Tower) in 1902, linking pedestrians with the high and low districts. Note also the mosaic patterned pavements – which are common all over Lisbon. 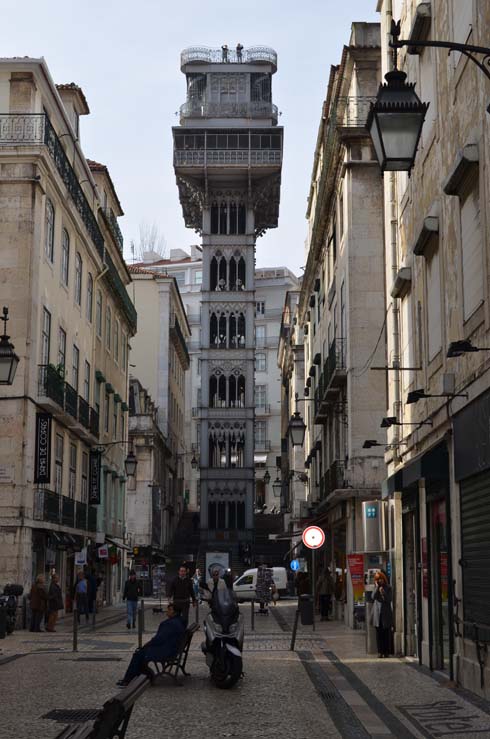 Lunch was a fresh sardine baguette (why do Portugese sardines taste so much batter than what we get in the UK?) followed by the famous Lisbon custard creams. 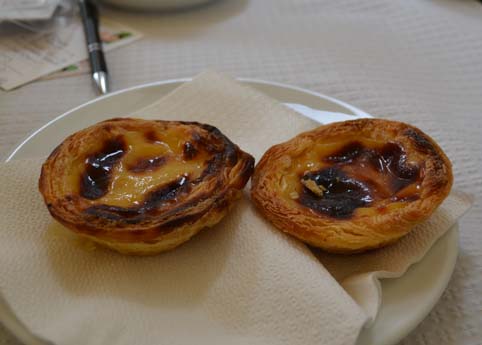 I couldn’t leave Lisbon without buying what most people most closely associate with Portugal – vintage port. My funds would only stretch to a 1987 vintage at 55 Euros, but for anyone with a palette and the money for a good vintage could pick up a bottle of 1902 vintage for a mere 1500 Euros!
Unfortunately our visit to Lisbon was too brief to take in the famous palaces at Sintra – a UNESCO World Heritage site. Something for our next visit….one day!
It was then back to the ship and a night + 1 day voyage to our next stop, Funchal on the island of Madeira.
Background information sourced from Wikipedia.