Our first day at sea was mainly taken up with unloading the suitcases (4 of them) into the limited storage space available in the cabin, undergoing a fairly protracted but thorough lifeboat drill (lifeboat 8 now indelibly imprinted on my brain), finding our way around the ship, and meeting our fellow travellers. Oh yes, and discovering where we eat and what times (most important!).
Actually, the cabin space is not too bad, and under normal circumstances the storage would be adequate, but packing for a 42-day cruise was a challenge – more so for Lynda (wife) than me, since this meant 42 x 2 changes of outfit (1 x daytime + 1 x evening), and of course shoes and bag have to match each outfit. Fortunately I could "donate" some of my allotted space since 2 shirts, 2 T-shirts and a pair of shoes don’t take up much space (I am joking, of course!).
The lifeboat drill was an interesting experience. Carried out in a calm and controlled environment, I wondered how many would actually survive if there were no lights, a smokey atmosphere and decks at a 15 degree angle. One gentleman spent the entire time we were assembled grappling with his lifebelt, and I’m not quite sure if he managed to sort it out by the time we finished, about 45 minutes later. I felt I was sometimes sub-conciously identifying the weak and the frail who might be the unwitting obstacles in a real emergency – but then again I’d hope if it came down to it I would help my fellow man (or woman) if they were having difficulties.
The evening dinner went without incident, other than trying to remember the names of the guests on our table (Brian, Bridget, Dermot, Margaret, Jo, Dale, Lynda)…I think. I’m pretty sure about Lynda though, she’s my wife! Once minor coincidence, Brian was ex Royal Navy (like me), and was a Weapons Electrical Artificer (like me). We shared a few old sea-dog stories and I’m sure we’ll bore our fellow guests with lots more before the week is out.
Pictured below, some of the artistic melon designs that randomly appear on the buffet table.
And so we arrived at Amsterdam at about 7.30am on Friday 5th January, having navigated the 19-mile canal that connects Amsterdam with the English Channel. We went ashore about 9.30am and walked the 10 minutes or so to Central Station, where I bought 2 x 24-hour tram tickets (7.5 Euros each), thinking we’d be hopping on and off trams all day. In reality, we mostly walked, taking in the sights and the wonderful architecture of the old 3-4 story houses. I’ve been to Amsterdam a few times previously, so I was able to fairly easily navigate our way to the famous (infamous?) "Rosse Buurt", otherwise know as De Wallen or more pupularaliy known as the red light district. This is a designated area for legalised prostitution and consists of a network of roads and alleys containing several hundred small, one-room apartments rented by sex workers who offer their services from behind a window or glass door, typically illuminated with red lights.
An interesting experience for Lynda, and a re-awekinging of some dimly forgotten experiences for me! Actually, at this time of day (about 11am) it was a very safe and sedate experience with only some of the more "experienced" (or desperate) wares on show behind their illuminitated windows. 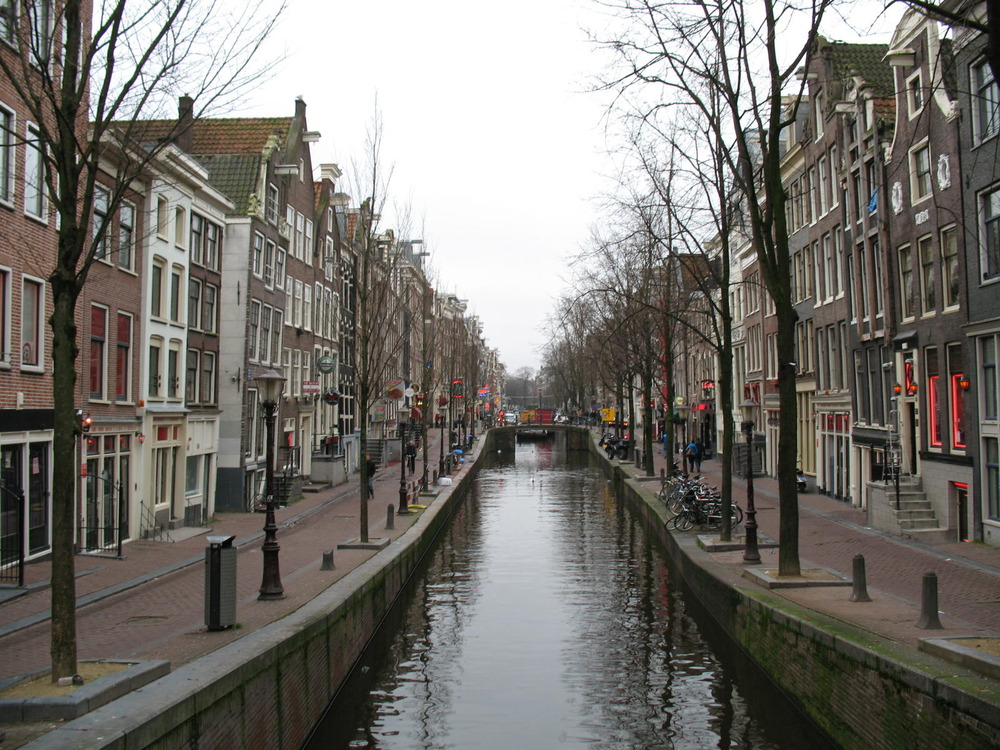 After a coffee (a normal one, not one from the many "Bruine Kroeg" (brown coffee) houses with their non-coffee-like aromas escaping from their open doorways), we thought we’d follow the usual tourist trail Anne Frank’s house. I’ve never been there before, despite my previous visits to Amsterdam, so was looking for a fairly old, pre-wartime house with one of those blue signs on the outside stating "Anne Frank lived here". In reality, what we found was a large, modern all-glass building with a queue of people snaking from it for a good 200 metres. I assume some of the original house might be in there somewhere, but unless I was prepared to wait about 6 hours in the queue I’ll never know for sure! 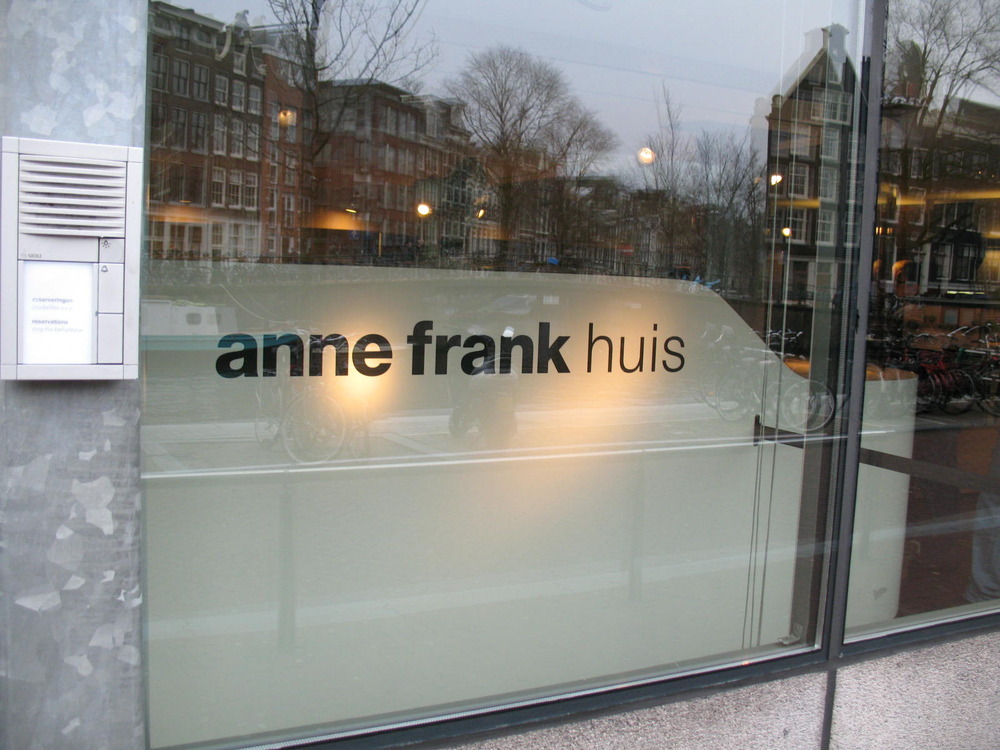 Our next stop was the Riksmuseum (or State) Museum. This gave us an excuse to use the tram tickets, since it’s a a fair walk beyond the city centre to Museimplein (Museum Square). All of the most important museums are located at Museimplein, including the Van Gogh and Stedelijk museums. The Rijksmuseum possesses the largest and most important collection of classical Dutch art. Its collection consists of nearly one million objects.The artist most associated with Amsterdam is Rembrandt, whose work, and the work of his pupils, is displayed in the Rijksmuseum. Rembrandt’s masterpiece De Nachtwacht (The Night Watch) is one of top pieces of art of the museum. It also houses paintings from artists like Van der Helst, Vermeer, Frans Hals, Ferdinand Bol, Albert Cuyp, Jacob van Ruisdael and Paulus Potter. Aside from paintings, the collection consists of a large variety of decorative art. This ranges from Delftware to giant dollhouses from the 17th century. 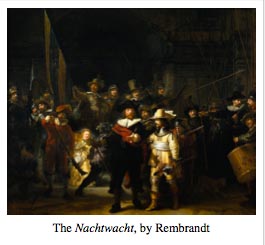 Having immersed ourselves in Dutch culture for over 2 hours, it was time to make our way back to the ship. A tram back to Centraal, and then a 10 minute walk along the harbour
Next stop, Lisbon, where we arrive on Tuesday 8th January via the Bay of Biscay, where we’re hoping (by all accounts) to see some dolphins and fin whales on their migratory path. Let’s hope the weather is calm! 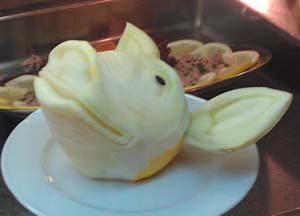 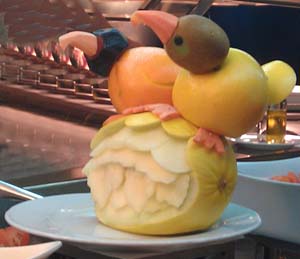