This is the first opportunity I’ve had to write anything about the Knowledge Hub (Khub) Advisory Group meeting that took place last week (17th September) in London – though a number of my colleagues have been pretty active in the blogosphere and twitterverse on the topic. In particular I found Ingrid Khoeler’s post pretty much spot on and wondered if indeed if I had anything more to say on the topic. Well, clearly yes, because I’ve started this post!Maybe I should start by giving some background to this project. I think the story starts in summer 2005 when I was contracted by the Improvement & Development Agency (IDeA) to develop a three year knowledge management strategy. Though it’s only 4 years ago, much has changed on the KM landscape since then, not least of which is the development of Web 2.0 tools and techniques to support knowledge sharing. However, I distinctly recall that this was deemed a high risk strategy when I raised the concept of developing a Web 2.0 platform that would support communities of practice (CoPs) working in local government, and switching emphasis from publishing (i.e. broadcasting) information on cases studies and best practice to connecting people who have the same goals or same issues, such that they can collectively solve problems and share learning with other practitioners working in the sector. I should also add that the term ‘Web 2.0’ was not even invented when we started this programme; it is accredited to Tim O’Reilly who used the term for the first time later that year.Winding the clock forward 4 years it is easy to forget how incredibly difficult it was to get this project off the ground and in particular getting to a point where there were sufficient number of users and communities to ensure the strategy was self-sustaining. With over 35,000 users and more than 900 CoPs, I think we’ve achieved this, and the CoP platform has gone on to win a number of industry awards for encouraging team working and knowledge sharing in local government. However it will come as no surprise to KM professionals working in this space to know that the technology was the easiest bit; establishing trusted communities and developing new ways of working is where the real effort was required.I was almost caught by surprise when I was asked ‘what next?’ when the anniversary of the 3-year strategy came around in 2008. I struggled with this question for some time, and spent an uncomfortable winter of 2008/9 coming up with a strategy for the ‘next 3 years’. However, I did eventually present a strategy paper to the IDeA KM Steering Group in February 2009 which described the idea of a ‘Knowledge Hub’. The concept is largely based on personal experience as a KM practitioner in trying to keep up to date with new ideas and good practice. This entailed belonging to many different professional networks, both on-line and off-line, active use of social bookmarking and development of many different types of lenses and filters – such as RSS feed aggregators and personalised dashboards – in order to make some sense of the growing mass of information that was available. In essence, picking out the conversations that add value from the background noise.Reflecting on the tools and techniques I used, I realised that though the ‘Web 2.0’ landscape has made it far easier to connect with people and share knowledge, it has also created its own complexities. I don’t think a day goes by where I don’t get invited to join another social network. Standards such as Open Social do help in creating the links between the community platforms that adopt this standard, but we’re still a long way from having one ubiquitous standard that all vendors are happy to support  – and maybe this is utopia.In developing the ‘next 3 years’ strategy it was also helpful to look at what had worked and what hadn’t with the IDeA CoP platform. Interestingly (and this is where I often wish I’d taken a degree in anthropology or sociology) most communities were being set up as private spaces, and there was little evidence of inter-community knowledge sharing. It was as if we’d created a platform which encouraged silos of knowledge to develop. And, with the exception of the IDeA-sponsored CoPs, it was very difficult to solicit information on how successful these closed and private CoPs were in achieving their goals. This has been partly addressed by having a ‘Community Hub’, an enhancement to the CoP platform that went live in October 2008 which encourages CoP members to publish what they are doing in a common community space visible to all users of the platform.So, we come to the ‘Knowledge Hub’. What is it? How will it overcome silo’d knowledge repositories? How will it help users to connect and share knowledge more effectively? How will it help to improve local government services? Quite simply, it will support more effective decision making by making it far easier for users to filter, share and access the information that is most relevant to them, using personal profile data and activity streams to improve relevance. We’re all familiar with commercial websites such as Amazon which give us information about ‘customers who purchased this also purchased…’, and reviews from customers on how good/bad a product is, so why not reuse and adapt these techniques for professional networking platforms? Again, Amazon were doing this long before the term Web 2.0 was bandied around, yet they are one of the best exponents of Web2.0 technology to engage with and better understand their customers. So, we’re not really doing anything new with the Knowledge Hub, other than applying these tools and techniques to a professional network of local government staff.The Khub will support social computing and adopt open standards that enable connections to be made between personal and professional networks. 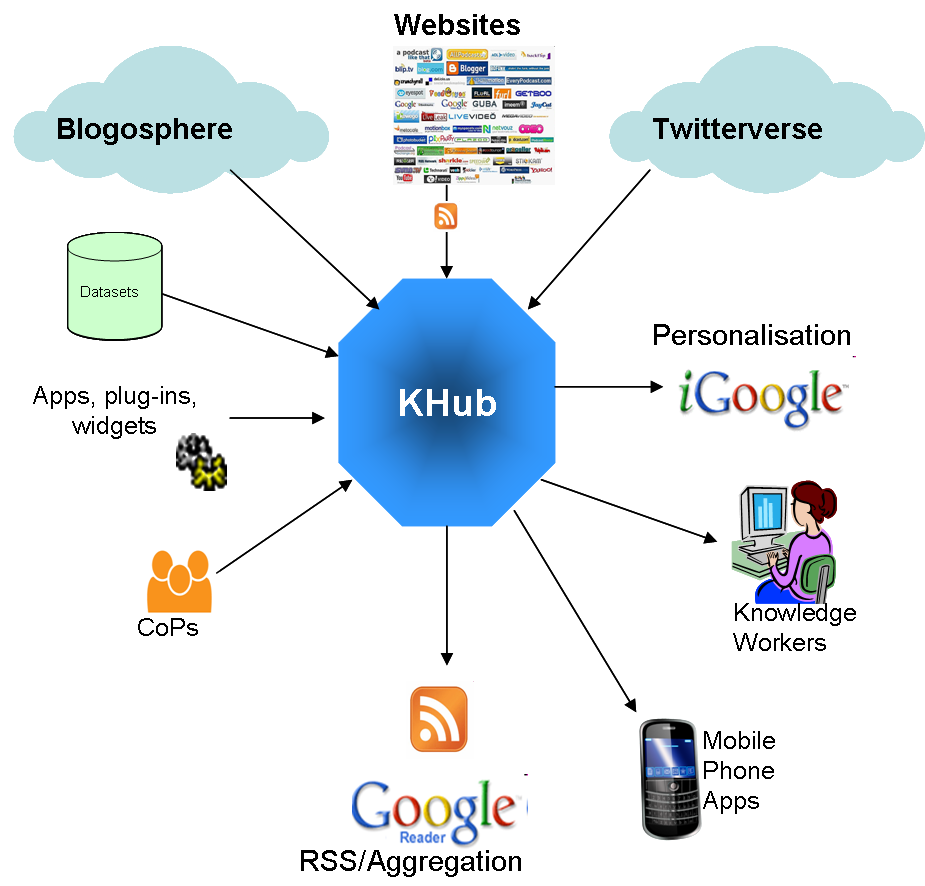 It will be a vantage point and visualisation tool, providing ‘heat maps’ showing emerging trends and ideas.  It will have a serendipity engine which enables new topics and ‘hot’ conversations to bubble up to the top.Content sources will include Twitter feeds – e.g. from local councils, Blogs, RSS feeds from council websites and other public, private and third sector organisations involved in public services. It will have access to publicly available datasets and enable mashups between different data sources to be created for value-added services.  For example, overlaying data on knife crime with socio-demographic data, displayed against Google Maps to indicate ‘hot spots’ or where local authority initiatives have had most impact.It will be an open platform where APIs can be used for developing value-added services. Widgets and plug-ins can be developed for users to easily customise and personalise their interface to the system, e.g. using iGoogle,  Netvibes or iPhones.It will support benchmarking and data visualisation tools that enable councils to compare and contrast services in order to identify lines of inquiry that may lead to greater efficiency savings (see post by Ingrid on the Efficiency Exchange).It’s also a big, bold and ambitious project with many stakeholders, and particularly the department for Communities and Local Government (CLG) who are funding the project.It is therefore extremely important that we have an empowered and ‘expert’ Advisory Group, drawn from a cohort of freelance and independent social innovators who are currently delivering collaborative solutions to the public sector, together with stakeholders from central government and social media early adopters working in councils and local communities. The Group will help shape the project over the coming months, and help in identifying the training and support that may be needed in local authorities in order to ensure its success.As I mentioned earlier, this is a 3-year strategy, but at least now the journey is now underway!Check out the slides below to get a better perspective of what this all about or contact me if you need any more information.  See also Dave Briggs post on The Partnerships and Places Library prototype – which is one of the discreet projects that will feed into the development of the Knowledge Hub. There’s a lot happening out there!If you want to follow the conversations around this topic, then sign-in or join the FriendFeed ‘room’.