Stephen DaleFebruary 4, 2013October 10, 2020
Continuing my travelogue of our epic cruise from Tilbury, to the Amazon, the West Indies and the Azores (and ultimately back to Tilbury).
I should be writing about our experience in Granada, where we arrived on the morning of Wednesday 30th January after two days at sea from our previous stop, Ile du Salut. But before I describe our visit to Granada, I thought I should say something about the growing number of incidents that have spiced up our days (excuse pun) on board our cruise ship, the Marco Polo. I guess one should expect a few issues and problems when over 700 passengers are confined together in a fairly limited space for a period of 6 weeks, but even I’ve been surprised by some of the things that I’ve seen or heard. I should perhaps note there is a degree of hearsay and anecdotal “evidence” in what follows, with occasional circumstantial evidence that might give credence to some of the gossip.
The first incident relates to the ship’s doctor. People on cruises fall ill, as a result of either a pre-existing condition or as a reaction to the food, or sea-sickness or whatever. We also have a fairly ‘aged’ demographic on board, so the doctor has been kept fairly busy. It takes a while before you see a trend, but I noticed after a couple of weeks into the cruise that there were a growing number of passengers walking around with bandages on their arms. This was followed by stories of medical bills running into several thousand pounds. A visit to the doctor (it is alleged) would result in a charge of £400 before any treatment. The standard treatment seems to be anti-biotics, invariably delivered intravenously (hence the bandages on the arms), which would then rack-up costs of over £1000 per day. One passenger (it is alleged) had a medical bill of over £7000. There was speculation that a letter had been written to the Daily Telegraph by a passenger describing one such case – though I have not so far been able to locate this letter. A number of passengers have corroborated the high medical bills, which has caused some consternation about the perils of falling ill, and what precisely is covered by travel insurance. Suffice to say, I move around the ship very carefully – can’t afford to have an accident!
We’ve seen one passenger leave the ship semi-concious on a stretcher – without returning. Goodness knows what their medical bill looks like – or maybe they saw it and hence the stretcher!
Then there was the arrest and detention of a passenger during our stay in the Amazon, specifically our stop at Manaus. For anyone familiar with cruising, you will know that all passports are given up to the ship’s administration, who liaise with the appropriate immigration authorities for each of the countries visited. We had Brazilian immigration staff permanently on board throughout our stay in the Amazon, and they found “a person of interest” to them during their audit of the passports. The said person (a lady) was detained as soon as she set foot ashore – allegedly on a fraud charge – and she hasn’t been seen since.
There was some speculation about the removal of a passenger following our visit to Boca da Valeria on the grounds of suspected pedophilia. However, there’s no real evidence to support this.
There has been more than one fracas in the dining areas, one of which I personally witnessed where two men squared up to each other about who had the rights of ownership of a particular table. It was just handbags at 10 paces, but possibly indicative of the increasingly fractious nature of some people now that we’re 4 weeks into the cruise. Will there be an actual physical assault before the cruise is over? Watch this space!
And then there are the seemingly growing number of passengers who will complain about everything and anything – the music is too loud/not loud enough/don’t want a radio/want a radio, it’s too hot/too cold/too wet etc. One lady complained of poor service in the restaurant because the waiter hadn’t cut her food up for her. It takes all sorts.
Anyway, about Granada. Granada the largest island in the Grenadines; smaller islands are Carriacou, Petit Martinique, Ronde Island, Caille Island, Diamond Island, Large Island, Saline Island, and Frigate Island. Sighted by Columbus in 1498 (though he didn’t actually make land) and named by Spanish sailors after the city of Granada in Andalucia, the island remained uncolonised for over 150 years. The island changed hands between the British and the French until 1783, after which it remained British. 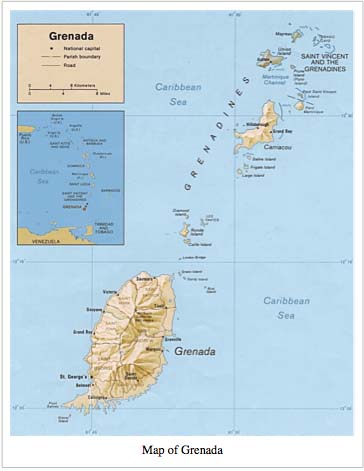 The islands are of volcanic origin with extremely rich soil. Grenada’s interior is very mountainous with Mount St. Catherine being the highest at 840 m. It is a leading producer of several different spices. Cinnamon, cloves, ginger, mace, allspice, orange/citrus peels and especially nutmeg, providing 20% of the world supply, are all major exports. The nutmeg on the nation’s flag represents the economic crop of Grenada; the nation is the world’s second largest producer of nutmeg (after Indonesia).
The culture is a fusion of Africa, East Indian, French and British practices. They drive on the left (as all ‘proper’ countries do) and their national sport is cricket.
The capital is St George’s, which has a very picturesque harbour and lots of colonial architecture, such as the Georgian York House (the Houses of Parliament). Only two miles to the south of St George’s is the beautiful Grand Anse Beach, a stunning stretch of immaculate white sand.
We took advantage of the “Rhum Runner”, a sort of motorised platform complete with steel band and bar serving bottomless rum punch. This did a cruise around St George’s harbour before heading out past Grand Anse Beach on the way to Mourne Rouge beach. We had about 1.5 hours to swim and snorkel at the beach, with the staff of Rhum Runner continuing to serve us with lashings of rum punch. On the return journey the party continued with a limbo dance challenge and dancing to the steel band. Yes, we had a good time, and it’s a pity we couldn’t have stayed longer in Granada, but our ship has a schedule and we sailed at 10pm to our next destination – Kingstown, St Vincent.
St George’s Harbour, Granada 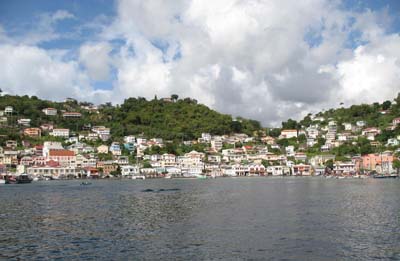 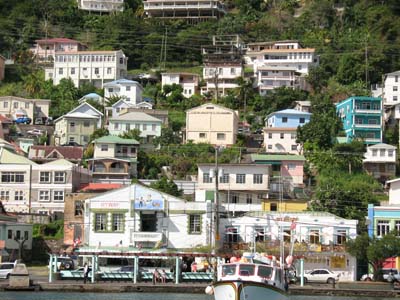 Limbo dancing on the Rhum Runner 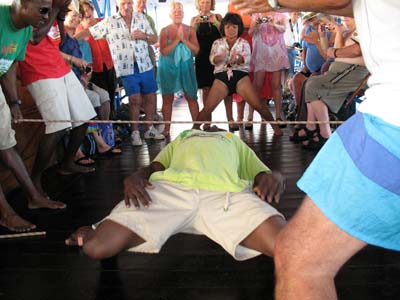