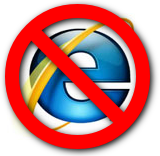 No to IE6
I’ve often wondered why there isn’t more of a groundswell of discontent amongst users who have no other choice but to use Internet Explorer version 6 (IE6) as their interface to the web world. I’m thinking primarily of public sector workers who probably had this installed on their PCs several years ago along with the perfunctory use of Sharepoint.  I have to assume that in most cases they don’t know what they are missing with Social Web enabled browsers such as Firefox or Chrome.  Maybe there are some (a minority?) who do use alternative or more up to date browsers on their home PCs and laptops who do feel the frustration of stepping back in time whenever they enter their workplace, but I don’t think they have yet organised themselves into a sufficiently powerful lobbying group that will create the conditions for change.Thanks to the efforts of Tom Watson MP, at least the issue has been given some focus in central government, subsequent to a series of parliamentary questions he raised requesting information about plans to upgrade from IE6. The underlying reason for the requests was that IE6 is not only less secure than later versions of the browser, but it limits or prevents staff making effective use of social media. Tom quite rightly thought that this was a potential staff productivity issue.  It’s slightly paradoxical that the one department who should be most worried about security is the only department that has no plans for upgrading.

MOD sticks with insecure browser: According to parliamentary written answers received by Labour MP Tom Watson, the majority of departments still require staff to use IE6. Most have plans to upgrade to the more secure IE7, and some to IE8, but the Ministry of Defence (MoD) has no plans to change.

But where is the voice of Local Government?  Who is lobbying for change in local councils? It’s all very quiet over at the LGA, “the voice of the local government sector” to quote from their website.  Maybe they don’t see this as cost-saving measure, which is perhaps understandable if you take the short term (some may argue ‘myopic’) view.  I’m assuming here that reluctance to upgrade from IE6 is likely to be because of cost; most internal websites (e.g. intranets) within Gov/Local Gov will have been tailored to work with the IE6 browser, and since IE6 did not follow W3C standards (Microsoft deciding at the time that they were above following any standard other than their own), any other browser type (Firefox, Opera, Safari etc.) would not render the content correctly. They (Microsoft) have since seen the error of their ways and have fallen into line with globally agreed standards when they released IE7 and IE8. The problem will be making changes to all of the legacy websites to work correctly with a new browser version.From this perspective yes, there is a cost, but what appears to have been forgotten is that any new web services or enhancements to existing websites have to be made backwards compatible to IE6. I can speak with a bit of authority here because I’ve been involved with the development of the IDEA Communities of Practice platform over the past 5 years. I know for a fact that for every change and enhancement to the website, around 15-20% of the cost goes into making it work with IE6. I estimate this to have cost almost £100k over the 5 years. If we took these same figures, i.e. 15-20% of website development costs going into ensuring compatibility with IE6, multiplied by the 400 or so local authority websites (and not even counting the fire services, the police and other agency websites) we end up with a pretty significant cost.  I’m not quite sure how this squares with the LGA’s priority for 2009/100 of “Efficiency and value for money”.But don’t take my word for it. Perhaps this article from Craig Grannell sums the issue up more succinctly than I can, abstract below:

Craig Grannell asks designers and developers if it’s finally time to take IE6 behind the shed and shoot it.Many argue that IE6 hinders development, due to the number of hacks required to get sites working in it. Opera web evangelist Bruce Lawson goes further, squarely blaming IE6 for “hindering the development of the web”, due to its lack of support for advanced CSS and XHTML. Many in the industry tell such tales: horror stories of a third of a site’s development time taken up by dealing with IE6; major display issues requiring a partial site rebuild, despite everything looking fine in all other browsers; elements randomly disappearing entirely due to the ‘hasLayout’ bug. “If anything, things will get worse, since we’re now battling three versions: 6, 7 and 8,” says Tom Muller of Kleber. “They all display content slightly differently and we regularly work up a site in Firefox or Safari, only to spend a day figuring out why our valid, semantic code doesn’t render correctly in Internet Explorer.”

But aside from cost, there is the other issue I alluded to at the start of this article, i.e. productivity of staff.  We’re increasingly recognising the power of social media tools and the social web to connect people with similar interests; to improve collaboration and knowledge sharing; to get a better understanding of what people think about gov/local gov services and how they can be improved.  We need to give staff working in the public sector access to the same tools and facilities that ordinary citizens are using to connect, share and collaborate.  Doing nothing is not an option, and is likely to make the gap between technologies that are available a private user and what is available to a public sector worker even greater.  Fore example:

YouTube to stop IE6 support: YouTube will no longer support Internet Explorer 6, TechRadar can confirm, with Google beginning to roll out warnings to those accessing the video site that they should update to a better browser.Google Docs, Google sites dropping support for IE6

And I’m sure we’re going to be seeing a lot of similar announcements in the coming year.So, what do we do about it (if we’re passionate enough about the topic)?

Other than this, I can only encourage those who are directly affected by their company’s/organisation’s reluctance to recognise this as an important issue to be tackled this year, to lobby their managers for change, and to join together in making more a of a noise. Maybe a bit of crowd-sourcing in the Social Web!